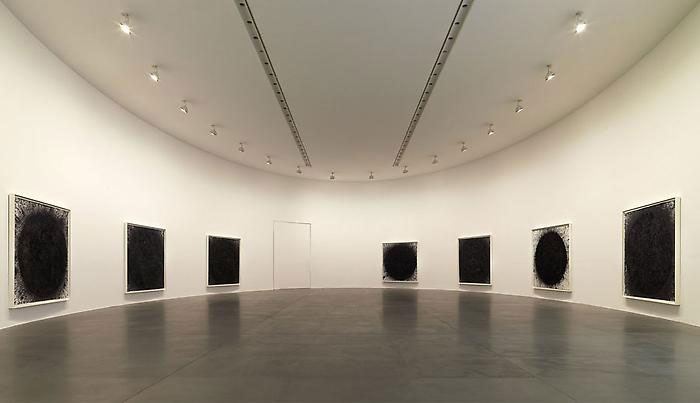 Richard Serra is known for his gargantuan minimalist sculptures such as Snake, a trio of sinuous steel sheets creating a curving path, permanently located in the largest gallery of the Guggenheim Museum, Bilbao. One of the pre-eminent sculptors of his generation, Richard Serra has long been acclaimed for his challenging and innovative work, with its emphasis on materiality and engagement between the viewer, site, and work. In the early 1960s, Serra and other Minimalist artists turned to industrial materials not conventionally used in art in order to accentuate the physical properties of their work and explore the spatial and the temporal. The results were monumental, philosophical, architectural and yet lyrical. This exhibition is exclusively showing his drawings. Serra has made drawings, not as precursors to sculptural works, but as separate and immediate forms of expression in their own right, throughout his career. As with his mammoth metal works they are forms of investigation, philosophical intentions translated into marks and visual surfaces.

Serra began working on Greenpoint Rounds in the last spring of 2009. In these large-scale works, which each measures 80 inches square, he has embedded a big black circle in the surface of the heavy paper. Using black paint-sticks, which he heats, sometimes to the point of fluidity, he builds up dense, irregular forms to create structures each with a unique surface. The name given to each is that of a writer: Melville, Primo Levi, Calvino, and Cormac McCarthy etc., those who, no doubt, have influenced Serra’s thinking. Yet walking round the gallery I thought immediately of Barnett Newman’s Stations of the Cross, for these works have the same transformative intensity. Here the very origins of life are being explored. Time, materiality, beginnings and ends create an Eliot-like circularity. It is not possible to read these marks without thinking of planetary explosions, matter and atoms. The scattered black pigment speaks of process, of time, the accretions of history, of space and the infinite. If one looks carefully there are footprints embedded in the thick visceral surfaces like Neil Armstrong’s first footsteps on the moon.

As in mediaeval alchemy these drawings are a mixture of science, philosophy, art and mysticism. Medieval alchemists approached their craft with a holistic attitude believing that purity of mind, body and spirit was necessary to pursue the alchemical quest and that all matter was composed of four elements: earth, air, fire and water. With the right combination of elements, it was believed that any substance might be transmuted into another. This included precious metals as well as elixirs to cure disease and prolong life.

Dark and light, ying and yang, being and non-being – Richard Serra’s powerful, minimal carbon-like surfaces are meditations on existence, visual haiku on dissolution and rebirth. Here art, science and philosophy meld in a powerful visual debate of meanings and origins.

Richard Serra Greenpoint Rounds at Gagosian, Rome from 9 April to 15 May 2010