For the Victorians it was the “exotic” East, as the late Edward Said pointed out in Orientalism, which revealed how fiction so often seems preferable to fact, and how we have a need to construct a mythological place on which to project our secret dreams and fantasies.

And so with the Wild West, argues Print the Legend: The myth of the West. That, too, was just as much a construct and the Western a celluloid vision of a prelapsarian playground where men were men and women knew their place. This idealisation, argues the curator, Patricia Bickers, goes back to Bishop Berkeley’s 18th-century imperialist musings, when he claimed that, from Europe, “Westward the course of empire takes its way”. The visionary American poet Walt Whitman also spoke of America’s “manifest destiny”, writing “for these states tend inland, and towards the Western sea, and I will also” (though he never travelled further west than the Mississippi.)

The Wild West has continued to exert a powerful influence both as image and metaphor on the American psyche and on Europeans who have never visited the continent, but grew up with cowboys riding across their Sunday-afternoon TVs.

How many of us remember the mythic heroes from our youths such as The Lone Ranger with his sidekick, Tonto, or the strong silent Raw Hide, who just kept those wagons rollin’ rollin’ rollin’? But how does all this work as an exhibition and, as with so many ideas-led shows, is the theory more interesting than the event?

In John Ford’s late Western The Man Who Shot Liberty Valance, the editor of the local paper proclaims “when the legend becomes fact, print the legend”. It is this line that gives the show its title. Longing and desire meld in Isaac Julien’s three-screen projection about two gay cowboys meeting in a cattle market. This draws on the homoerotic backdrop that colours so many Westerns where the “true” relationships – as in Butch Cassidy and the Sundance Kid – are between men.

In Gillian Wearing’s video we, the viewers, watch Western enthusiasts as they sit drinking and watching themselves acting a “shoot out” in the Hayward Gallery.

The white screen sited on waste ground opposite the gallery appears to be a blank canvas – on to which we might project anything – until the sun goes down over Edinburgh and an image of John Wayne comes up. Slowed to one frame every 23 minutes and running 24 hours a day, the length of Douglas Gordon’s work corresponds in real time to the five-year search that is the subject of John Ford’s classic 1956 Western The Searchers. Images of longing weave through other works, such as Salla Tykka’s adolescent rite of passage choreographed to the swelling score of Ennio Morricone’s music from Once Upon a Time in the West, while Mike Nelson’s underground scarlet cavern of desire, hidden like something illicit in the basement, references Clint Eastwood “painting the town red” in High Plains Drifter. 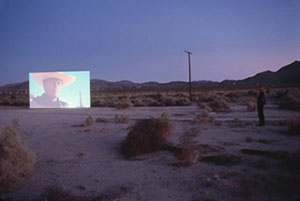 Simon Patterson’s hand-painted installation that reflects shades of Kodak grey takes its structure from the shoot-out in The Man Who Shot Liberty Valance, but unless you knew that it wouldn’t make a lot of sense; Cornelia Parker’s Embryo Firearms: Colt 45 guns in the earliest stages of production, is redolent of the West’s violent past.

So does the show work? Well such heavy conceptual underpinnings are always tricky, but it does emphasise the myth of the American West as a land fit for heroes, a myth that seems to be as potent and as politically and culturally charged today as ever.

Print The Legend at the Fruitmarket Gallery until 5 July 2008