Rather like the Christian calendar, which codifies events as occurring before and after the birth of Christ, so the British art scene can be understood as that which existed before the arrival of Charles Saatchi and after his hallmark exhibition Sensation (was it really 1997?). From his background in advertising he promoted work that was hard-hitting, ironic and had a desire to shock, so that the language of art seemed to shrink in direct proportion to his interest in it. Transformation, the sublime and social discourse all went out the window in favor of a fashionable insouciance. But love or hate Jake and Dinos Chapman’s penile-nosed dolls or Marcus Harvey’s portrait of the moors murderer Myra Hindley, no one can doubt the effect that Charles Saatchi has had on British art.

Since then he seems to have been looking for the “next big thing.” We had New Neurotic Realism, whatever that is – you can tell Saatchi is an advertising guru; it’s just such a great title. But what did it add up to? Not much, really, other than being a rather pale version of Sensation. Then there was Triumph of Painting, the gallery’s 20th anniversary show, at London’s County Hall, which never made a very successful gallery. After having been largely absent from the gallery scene as a result of being forced from his Thames side home in 2005, Saatchi came back fighting in 2009 with The Revolution Continues: New Chinese Art, housed in his swish new Chelsea exhibition space, with its white walls and de rigueur acres of glass, in the Duke of York’s prestigious former headquarters.

Now George Orwell’s dystopian classic Nineteen Eighty-Four, in which Newspeak is the only language in the world whose vocabulary is getting smaller every year”, provides the title for his latest exhibition. To be included in such a survey show is tantamount to artistic canonization. So has Saatchi come up with anything fresh that will take art off in new directions in the manner of Sensation? Well, yes and no.

That he refuses to include video work might be a reason to claim that he is out of step with what is really going on. Yet on the other hand there would be many who would welcome his focus on the traditional arts of painting and sculpture. And is it any good? Well again, yes and no; though it’s hard to see any overarching themes emerging, other than to say that there seems to be a blessed reduction in ubiquitous irony, which has come to look as tired as a pair of 1980s shoulder pads. 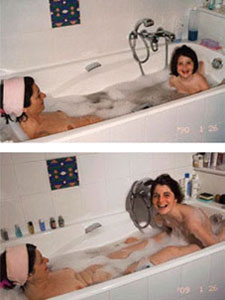 Clarisse d’Arcimoles
In The Bath (My Mother And My Sister), 2009

Much of the painting is of the sloshy-boshy abstract school and Luke Gottelier’s desire to consider “Englishness” is not aided by the clichéd inclusion of old school and club ties in his paint. Whereas Arif Ozakca’s work, which creates an interplay between his own Anglo-Turkish-Cypriot heritage by setting aspects of Ottoman tiles and miniature painting within East-End London streets, is genuinely arresting. So, too, are Maurizio Anseri’s portraits made by sewing directly onto vintage photographs. His embroidered patterns not only act as strangely surreal costumes but also suggest disquieting psychological masks and veils. Idris Khan’s ghostly ectoplasmic photographic prints of gas reservoirs and water towers have a poetic subtlety and could easily be mistaken for graphite drawings, while Tom Elli’s black-and-white painting of copulating dogs in acrylic on canvas not only plays with Walter Benjamin ideas of the mechanisms of cultural production but also evokes something of Francis Bacon’s 1952 Study of a Dog.

Clarisse d’Arcimoles’ photographs, in which a past scene is then reproduced exactly at a later date, such as her sister sharing a bath with her mother as a small child and then, as an adult, provoke very human thoughts about the passing time, while Tessa Farmer’s vitrine Swarm was always going to be a hit. A sort of miniature Damien Hirst ensemble, she has used the desiccated remains of insects and other organic ephemera to create a veritable cabinet of curiosities that evokes the Victorian fascination with magic and fairies that battled alongside a more rational Darwinian approach to science. Big, baggy and at times overblown there are, nevertheless, things well worth seeing in this exhibition. Ending with Des Hughes’ Endless Endless (2010), based on the effigies of stone knights found in medieval English churches, this ragged figure seems to link long-forgotten history with the tragedies and atrocities of modernity