In the semi-darkness of the small upstairs gallery at Riflemaker in London’s Beak Street there are a number of show cases filled with a strange, beautiful and fragile substance. It has an ethereal, otherworldly quality, like spun air.

It is Aerogel, a substance used by Nasa in its Stardust project to collect both cometary and interstellar dust. Attached to a spacecraft, it has been exposed to a stream of interstellar particles flowing from outer space, far beyond the planet Mars, into the solar system.

During her 2005 ACE and Nasa-funded residency at the Space Sciences Laboratory in California, the artist Liliane Lijn worked with the scientist Andrew Westphal, director of the Stardust project, to explore her interest in light. One of the pioneers of the transformation of scientific thought into art, Lijn has been fascinated not only with the properties of light, sound and movement, but has also expanded her work into the fields of performance and video.

In the 1960s she experimented with her Poem Machines and Poemcons that used kinetic texts to explore movement and stillness, solidity and opacity, transparency and emptiness. Inspired by Milarepa, an 11th-century Buddhist teacher and poet, she took from his teachings the notion that all was void and light, and that it was “the business of art to find the patterns in the noise”.

Now she has used this strange and delicate material, Aerogel, to make discs and cones. Cones have been part of her aesthetic vocabulary since the Sixties. An ubiquitous form, they were everywhere she looked, from traffic cones to women’s skirts, from church spires to rocket parts.

Always interested in the language of diverse materials, she began to explore the properties of Aerogel, which is used as a thermal insulator for delicate instruments in space. On receiving packages from the Jet Propulsion Laboratories, Pasadena, she realised how vulnerable it was to shattering and fragmentation. These ruins, she felt, equated with the fragments of our material history, with buildings, cities and the traces left by past civilisations.

History is comprised of memories of human experience, while video is memory encoded in light. Because of its essentially empty nature, video projected on to Aerogel was only partly reflected and mostly passed through filtered in layers. In Lijn’s work, footage of ancient temples, markets, people from different cultures dancing, all dissolve in a constant flux of fragile light and colour to blur preconceived and constructed meanings. Order, she suggests, is precarious, and the limits of our known world simply what we have learnt to perceive. 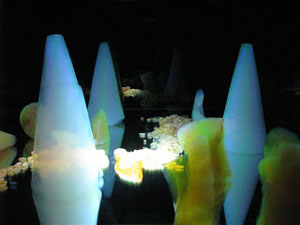 Born in New York in 1939, Liliane Lijn studied at the Sorbonne, where she came into contact with writers such Gregory Corso and William Burroughs. Arriving in London in 1967 for a solo exhibition, she found that the gallery had unexpectedly closed. Offered a debut instead at the newly opened Indica in Masons Yard, her international career took off from there. Her explorations have included early light sculptures and Poem Machines, artists’ books such as Crossing Map 1983, her performing Goddesses and large-scale public sculpture.

Also on show here, alongside the Aerogel works and early kinetic Koans and conical forms in wood, plastic, acrylic, ceramic and aluminium, is the video Solar Hills, which grew out of her residency at the Space Sciences Laboratory at the University of California, and was a collaboration with John Vallerga. A large-scale installation in the landscape, it fills the horizon with natural solar light that draws people’s attention to the line between heaven and earth in a poetic evocation of the natural world.

The exuberant diversity of form of Lijn’s work has both excited and perplexed the art world since she burst on to London’s art scene in the mid-1960s. Forty years on she still manages to keep alive the spirit of the avant-garde that was such a hallmark of that era.