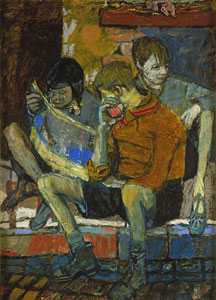 Joan Eardley is not much known south of the border. As a gauche, young Scottish painter happier keeping company with street children in Glasgow or working on the north-east Scottish coast around Catterline than forging a place in the art world, her work has tended to be ignored outside Scotland.

Now there is a chance to re-assess her career, which was cut short in 1963 when she died of breast cancer at the age of 42. It’s a reassessment worth making, for if Eardley had not been a shy woman hidden away amid the squalor of post-war Glasgow, her work might have found greater favour.

Today, her place on the margins which is where she chose to work, as a social realist in the vein of the English Kitchen Sink School while also developing her own form of northern Abstract Expressionism in her messy, moody seascapes and landscapes is clearer. Being so cut off from the “art world”, she seemed unconcerned with the post-war battles between abstraction and realism. The poet Gerard Manley Hopkins talked of “inscape” as being the “essence” of a subject, and Eardley was similarly concerned with a true emotional translation of the world through paint on to canvas. 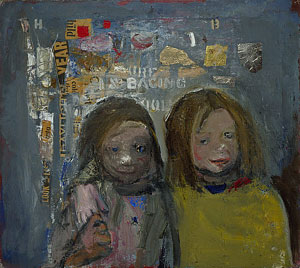 Eardley was born in Sussex in 1921, the daughter of an army captain who committed suicide as a result of depression brought on by the First World War. She was raised in an all-female household, where she was encouraged to take up painting. When the family moved back from London to Scotland, she enrolled at the Glasgow School of Art and in 1948 won a travelling scholarship that allowed her to spend time in Italy and France.

Her beautifully observed drawings of Italian peasants show her concern with the poor and marginalised. Other figurative paintings, such as The Mixer Men, 1944 and Back Street Bookie, 1952, share the identification with the labouring poor found in the early work of Prunella Clough or the wartime Port Glasgow paintings of Stanley Spencer, which had been a profound influence.

But Eardley will be best remembered for her tender, humane, often humorous paintings of Glasgow slum children, mostly from the large Samson family, who found their way into her dilapidated attic studio, and for the seascapes and storms painted in Catterline.

Of the two genres, it is possibly the Glasgow children that cause the most problems for the modern viewer. While they are raw, unsentimental and utterly authentic, our reading of them has been skewed by countless cheap Montmartre pastiches of large-eyed waifs tugging at our heartstrings.

So it is the landscapes and seascapes that hold up best. In these wild seas and storms, Turner is never far away. Eardley painted in situ, weighing down the boards on which she painted with rocks. The paint is scored, applied with a palette knife, dribbled across the surface. In some, grit, grass and seed heads have been included in works that might have been made by Anselm Kiefer a couple of decades later.

It is hard to know what she might have done had she lived longer. But there is no doubt that here is a painter who worked out of deep feeling and captured what a 1948 issue of Picture Post referred to as the “Forgotten Gorbals”. In that sense, she is closer to photographers such as Bert Hardy and Bill Brandt than to the works of, say, Lucian Freud.

Of her seascapes, she said: “When I’m painting in the North-east, I hardly ever move out of the village. I hardly move from one spot. I find the more I know the place, the more I know the particular spot… the more you can get out of it, the more it gives you…” And it is these paintings, with their fluid, muscular beauty and visceral truth, that I think will continue to demand attention.

Images © The Estate of Joan Eardley