In the past few weeks, the church has pronounced the virtual death of Christianity as a force in this country. With multifaith religious instruction the norm in most schools, who, any longer, knows the Bible’s stories, let alone anything of the hierarchy of saints or the religious iconography so familiar to those who inhabited the medieval world? So what is a modern audience likely to make of a new exhibition of medieval sculpture at Tate Britain, curated by the medievalist Phillip Lindley and installed by the artist Richard Deacon? What readings and what relevance can such an exhibition have? 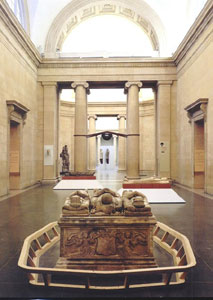 Many visitors to Tate Britain must have wondered what came before the ranks of po-faced 16th-century portraits and genre paintings that form the beginning of the gallery’s collection. In fact, the art that followed the Reformation resulted directly from the fierce battles that were fought over the role of religious imagery – particularly figure sculpture – between the Catholic Church and the new Protestantism. The clash of ideologies almost totally obliterated the religious images of the Middle Ages, and continued to have an effect on sculpture from the 16th until the 19th centuries.

Central to the debate was the exhortation from Exodus: “Thou shalt not make unto thee any graven image, or any likeness of any thing that is in heaven above, or that is in the earth beneath, or that is in the water under the earth.” Yet the highly skilled craftsmen of the 15th and 16th centuries produced increasingly naturalistic images for churches and cathedrals, often heavily painted and studded with gems. But it was their very skill, which often seemed to blur the line between the image and what it represented, that many believed encouraged the slide into superstition. Some, like the Virgin at Walsingham, were endowed with particular potency, as was St Wilgefortis of St Paul’s (a beautiful virgin given a beard to keep her chaste), and were prayed to by women to rid themselves of undesirable husbands. With the radical reform movements arriving from northern Europe and a return to the fundamentals of scriptural text made possible by the new processes of printing, the battle lines were drawn between word and image. The result was that, in English and Welsh churches between the early 1530s and roughly 1650, around 98 per cent of statuary was destroyed in a glut of Protestant iconoclasm.

The works for the Tate exhibition have been borrowed predominantly from churches and cathedrals across England and Wales. At the centre is the Tree of Jesse, the largest surviving wooden sculpture from the 15th century. Carved in oak, it has never been seen outside its home church, St Mary’s Priory in Abergavenny.

However, this is not simply an arcane display of rare items, but rather an exhibition that seeks, through the interventions of Richard Deacon, to create new historical perspectives and, inevitably, new ways of reading these artefacts. Inspired by the experience of seeing the huge hand of Ramses II being moved for the reinstallation of the British Museum’s Egyptian galleries in the 1970s, when the sculpture seemed to become dynamically alive, Deacon was concerned that the work shown here was enhanced by, at the same time as adding to, the architectural space of the long Duveen Gallery, so that the viewer has a sense of an object’s weight and its vulnerability. “New plinths for old sculptures”, is how he describes the style-breaking bases he has created, juxtaposing contemporary materials with medieval alabaster and limestone. In the centre of the gallery, 13th-century effigies of knights in full armour (somewhat reminiscent of Sidney Nolan’s Ned Kelly), with one open eye peeping through the slit in their helmets as they await the Resurrection, lie on mattresses of shiny aluminium tread plates on low plinths of grey MDF, while a finely preserved St George and Dragon (c1510), from Eton College, sits aloft a tall, black, painted steel column like some sort of medieval Nelson.

Even though one of the central aims of the exhibition is to bring historic sculpture to new audiences, this daring installation allows viewers to project their own interpretations on to the work, which, for most of us, consists of relics and fragments emptied of their original symbolic meanings. And yet, as Deacon says, “these objects are survivors” and “this rich imagery” provides the background against which British art was formed. Although these pieces would have looked very different, with their polychrome surfaces, to the pilgrims who visited them at Wells or Winchester cathedrals, there is something about their stripped, spare beauty, emphasised by this new display, that appeals to a modern sensibility. While we may not be able to relate to them by drawing immediately on the context of the biblical stories that they were originally created to illustrate, they seem now like silent witnesses to the process of history. Reformations, revolutions and regicide, world wars and the nuclear age, these sculptures have seen them all.