I have long been interested in the work of Chantal Joffe and have written about her on several occasions. Her figurative paintings of family and friends are routed in a gritty, observed reality which makes her unusual in an art world full of insouciant irony. She’s interested in people, their inner landscapes and what makes them tick. She’s also interested in the materiality and language of paint which she uses with verve and vitality. She’s obsessed with what paint can be made to do and what it can tell us.

There are many influences to her work. The American artist Alice Neel. Renaissance portraits of the Madonna and child. But there’s one influence that connects us directly, as writer and artist – the little-known German painter, Paula Modershon-Becker (1876-1907). There is a self-portrait of Paula in the Courtauld but you’d be hard pressed to see any more of her work in this country. Most of it is in Germany. Joffe’s new exhibition at The Lowry, which uses a quote from Modersohn-Becker as its title is, in many ways, a homage.

“Paula is a bubble between two centuries”, Joffe tells me.

In 2012, I wrote Girl in White, a novel based on Modersohn-Becker’s relationships with those she met when she settled in Worspwede, a remote artists’ colony on the North German moors. There, she mixed with others who wanted to live a life dedicated to art outside the strictures of 19th century German bourgeois society. These people included the older painter Otto Modersohn, who was to become her husband, the poet Rainer Maria Rilke, with whom she had a passionate friendship, and the sculptor Clara Westhoff, who, disastrously, became Rilke’s wife.

The Worpswede colony was very much part of the mood-music among late 19th century European artists who wanted to ‘return’ to nature. Essentially a Romantic movement, this nostalgia for a prelapsarian existence was precipitated by the growth of industrialisation and the effects of urban modernisation. Many believed these were destroying their relationship with the landscape and their folk traditions. When Paula arrived in Worpswede she too initially painted landscape but, as she grew intellectually, emotionally and artistically, she developed a different agenda. Her subject became people. She painted the old in the local poorhouse, breast-feeding women and the children of peasants with an empathy close to that of Van Gogh’s. It’s hard for us to realise just how radical such a decision was, especially by a young middle-class girl. Paula sought out the raw, the authentic and the marginalised in a way that was completely modern. There wasn’t a smack of the drawing-room sentiment anywhere to be seen.

Talking to Chantal in her studio, on the battered sofa among postcards of Paula’s work and her own half-finished paintings, it becomes more and more evident that our interests overlap. We’re both mothers and creative women who, like many others including Paula, have struggled to find a balance between home, art, motherhood and career and, for whom, the intimacy of everyday life is central to our work. Though separated by more than 100 years, Paula’s intensity of vision and her commitment to the fullness of life, as an artist and a woman, reverberates throughout Joffe’s work. Like Freud, Joffe paints those from within a tight circle of family and friends. She not so much produces portraits, in the sense of a photographic likeness, but investigations – a sense of what it is like to inhabit the subject’s skin.

“I was”,  she says, “hesitant, mindful of the danger of placing myself alongside such a strong painter. I was worried it’d be seen as a form of self-aggrandisement, but I’m interested in the intimacy Paula creates. Personal feeling is always the main thing. That’s why I love her. There’s never anything unnecessary, nothing extra or extraneous. Only what is needed. The work’s so strong, so modern, so ahead of its time. My decision to go ahead was helped by the fact that she’s poorly known here and that maybe, through this exhibition, her work will become more celebrated. She’s just so good.”

I ask why she chose Paula and she says that she was attracted to a painter she’ d never seen before – a woman who was both tough and romantic, vulnerable yet determined. She loves the works of Picasso and Bonnard but here was a painter she could relate to directly and in a very personal way. She wanted to explore what they shared. Her paintings, like Paula’s, are intimate and domestic. She’s painted fellow artists, such as Ishbel Myerscough, and charted the passage of her daughter Esme from new-born infant to adolescent, with many of the blips along the way. These works map the passing of time, the minute changes that occur day to day within emotional connections and bonds.

As we sit talking, with our tea and biscuits, about our mutual concerns – just as Paula did with her friend Clara in her Worpswede studio – it strikes me how similar Joffe looks like Modersohn-Becker. She has the same broad intelligent face, pulled-back hair and snub nose. I tell her my thoughts and she blushes. Of course, she has seen this herself, though she does not admit it. It’s there in her Self-Portrait as Paula II where she looks inscrutably over her shoulder with her back naked to the viewer. Self-Portrait at 21, with its Matisse-style patterned robe, echoes something of the background of Paula’s Self-Portrait on the Sixth Wedding Day. 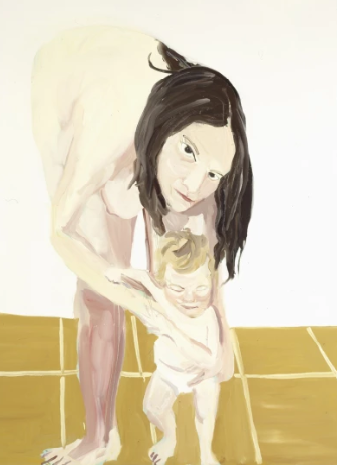 Paula Modersohn-Becker had an uncanny sense that she was going to die young. Her quest, at the century’s turn, was ‘to become something.’ Her whole life was a struggle between the binaries of domesticity and artistic fulfilment, duty and self-determination, the security of home and the stimulation of adventure and new experience. She longed for a child. She would paint herself holding her stomach as if she were in a phantom pregnancy. She would then claim that she was actually pregnant with art. Despite Modersohn-Becker’s bourgeois upbringing, she had a restless sensuality which is mirrored in Joffe’s work. You can see it in her unsparing nude self-portraits that show her, for example, sitting naked on a striped chaise lounge. There’s nothing romantic about the dark circles under her eyes, her sagging breasts and stomach and the unflattering long black socks – the only things she wears. And, there is nothing flattering about the ¾ Length Self-Portrait where she stands against a barren, leafless tree like some menopausal Eve. There are also a number of paintings of pregnant women and women with children, and there’s an especial poignancy to those of her daughter, Esme, when we know that Paula died tragically at the age of 32 from an embolism – only weeks after giving birth to her own daughter, Mathilde.

Paula Modersohn- Becker’s life was brilliant but sadly her career cut short. Her passionate female nudes and portraits of prepubescent girls, which sought for ever-more simplification, are extraordinary, considering that convention demanded she was a wife first and a painter second. Spirited, brave, tender and fierce, Paula understood that ‘personal feeling’ is always the main thing. Fashions in art come and go but there’ll always be a place for what is authentic, for what is true.

It’s as if Joffe, with her broad strokes of expressive and nervy paint, has picked up Paula’s baton and is running with it into the middle of the 21st century.

Chantal Joffe’s artwork exhibition ‘Personal Feeling is the Main Thing’ is running at The Lowry Art Gallery until the 2nd September. You can find out more about the artist here.