Rain – Auvers painted by Vincent van Gogh in 1890 and now housed in The National Museum &  Gallery, Cardiff, is a work that has haunted the painter Carol Robertson since the 1970’s when she first saw it as an art student. In May 1890 van Gogh moved to Auvers-sur-Oise, just an hour by train from Paris. He was hoping to find the stability he so craved, which had eluded him during his time in the south. From Auvers he wrote to his brother Theo, “I have painted three big canvases already.” “They are vast stretches of corn under troubled skies, and I did not need to go out of my way to try to express sadness and the extreme of loneliness.” Days after writing this, van Gogh was dead. Rain – Auvers may well have been one of the paintings to which he referred. Full of poignant melancholy, with its subdued northern palette, its horizontal golden cornfields set against slate-grey, blue-grey bands of sky, village and woods, it is the painting to which Robertson has returned as the catalyst for her homage to van Gogh.

Carol Robertson is an abstract painter. Her refined geometric configurations use a consciously limited vocabulary of circles, squares and striped formations. It is as if through this considered, condensed language she is able to tap into a well spring of archetypal metaphors, to connect with what is timeless; the spirituality evoked in the unbroken image of the mandala, notions of fidelity, the symbolism of returning to zero, of beginning the same journey yet again but in a different form. To know, as T.S. Eliot said, “the place for the first time.” Although her work is abstract, her inspiration stems from the real and experienced world, from complex human emotions. The relationship between dark and light informs everything she paints. Apart from the subtle physical and visual effects it creates, she sets up a series of philosophical binaries; a dialectic between inside and out, between what is revealed and what remains hidden and illustrates the tension between the made image and the real world that inspired it.

Her starting points for For Vincent van Gogh: Rain – Auvers 1, 2003 were scale and format. Van Gogh’s painting is 19″ x 38″; a double square ideal for a panoramic landscape. Robertson has used the same format, upscaled to 40″ x 80″. She has also appropriated van Gogh’s soft brooding colours, rebalancing them in an abstract formation of stripes to evoke the same subdued mood as in the original painting. But more than anything it is the harsh diagonals of rain that link the two works. In June 1890, van Gogh wrote to his sister, “A fine drizzle of rain streaks the whole with blue and grey lines.” Yet there is nothing delicate about van Gogh’s drizzle. Rather the painting evokes a sense of angry frustration, a desire for erasure, as if, to quote Eliot again, “That is not what I meant at all. That is not it, at all.” It is in these dramatic lines of cancellation that we can sense something of the turmoil of van Gogh’s final days. It is as if in his disturbed state of mind he could not accept the quiet work that he had executed, for the daring diagonals seem to cut across the skin of the painting like self-inflicted wounds or fixed bars that divide the viewer from the valley ahead; from the cottages, hearths and home, as if all comfort must be denied. As Robertson has said, such marks “merit the actions of a man whose art is expressing what he sees, but reveal all too painfully what he is feeling.”

It was van Gogh’s addition of the rain to his painting, this potential act of painterly self-immolation that so moved Robertson. In her own version the painting was effectively completed before she added the diagonals, which dissect the entire surface from top to bottom like bolts of electric blue lightening. Thus a quiet, formal work, with its beautifully balanced bands of yellow, blue and black has evolved into one with an enormous emotional charge. Risk, negation, the possibility of collapse and failure, as well as the movement from positive to negative back to positive, all play their part in the potential reading of this painting. For Robertson seems intuitively to have understood that by letting go and allowing his emotions to dominate, van Gogh arrived at something that was vulnerable and precarious, fragile yet full of passion, which could not have been achieved any other way. It is this quality that emanates from her own painting; a combination of aesthetic control and emotion. 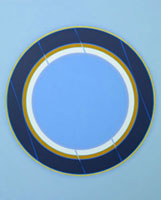 For Vincent van Gogh: Rain-Auvers 2 and 3, she moved further away from the original work so that the diagonal slashes of rain have been reduced to structural abstract elements within her familiar motif, the circle. The circle is the form to which she finds herself intuitively returning again and again; for it is organic, feminine, democratic and non-hierarchical. In Auvers 3 the central aperture opens into a blue void that suggests both the infinite heaven of a medieval painting and the endless cycle of life that is the hallmark of many oriental religions. In a more western, psychoanalytic reading it might be seen as the core of the self; that elusive place constantly sought by the serious artist. 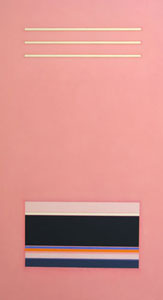 Immediately after completing the van Gogh inspired paintings Robertson started a residency at the Ballinglen Art Foundation in Co Mayo, Ireland, where she made a series of finely wrought watercolours. In these Robertson demonstrates her distinctive hallmark; the fine balance between what is controlled and what is felt. Here solid blocks of watercolour have been laid down over splashes and leakages of paint that describe clouds, sun and rain, the fleeting changes and nuances of weather in the actual physical world. There is an added potency in that the medium used, water, is also the very element she is attempting to describe. Other elements such as the smooth stones and pebbles glimpsed on remote Irish beaches find their way, in abstract form, into paintings such as My Own Sky and Lago. Here the inner asymmetrical spheres fill the inner void of the controlled compass drawn circle to create a tension between mind and heart. Ultimately all Carol Robertson’s decisions are intellectual and aesthetic. The question pondered in the studio may be, for example, does that violet glow with yellow or must it be knocked back or pulled forward to make the painting work? Certain areas will be worked and reworked many times, though the history of the painting is always visible to the careful viewer. Surfaces of differing solidity and light are placed next to each other. Some are opaque and impenetrable, others transparent and atmospheric. This has the effect of making the eye see the same area in different ways, both as solid form and as space. But her surfaces are always tactile, intimate and sensual; demanding to be touched like skin. Often during the construction of a painting she will write on the canvas. It is a form of psychic instruction to herself; a way of working out what she really thinks is important. Although always covered beneath layers of oil paint in the final work, these thoughts and words exist embedded within the fabric of a painting like fossils in striations of rock. In works like Soft Day or Come the Evening empty vistas of ocean, pearl grey mists and saturated sunsets are evoked with a poetic lyricism. Her methodology is meditative and slow; a process of discovery, a coming into being found through the physical act of careful observant painting, where there exists a constant play between hard and soft as the brush rubs up against the line and forms an edge. Eschewing short cuts and the paraphernalia of the modern studio: masking tape and spray guns, Carol Robertson’s paintings are ‘found’ through the long slow process of their making. They cannot be forced. For like breathing or the beat of the heart they need to find their own rhythms. As she has said, the “I as I comes through living and experience, you can’t learn it like reading or writing.”

It is this balance, this desire for the integration of the self that is painter with the self that is a caring, observant, considered person living in the actual world, that gives these paintings their potency. For as the American poet Walt Whitman wrote in his elegiac poem Song of Myself:

Urge and urge and urge,
Always the procreant urge of the world,
Out of the dimness opposite equals advance, always substance and
increase, always sex.
Always a knit of identity, always distinction, always a breed of life.

Carol Robertson’s paintings may be abstract but they are never disconnected from the natural world, from complex feelings, from the awe we feel in front of nature, they are never self-consciously and only just art;they are “always a breed of life.”