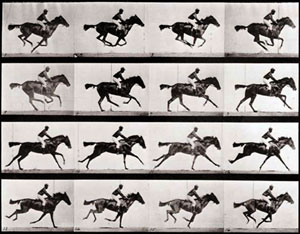 For a nobody from Kingston upon Thames Edward James Muggeridge reinvented himself as a remarkable somebody, the photographer Eadweard Muybridge. His life reads like a nineteen century thriller full of derring-do, exotic travel, narcissism, showmanship, technical brilliance, trickery (he painted moons and clouds onto his photographs) and even murder (he shot dead his much younger wife’s lover, though was acquitted by the jury of mostly middle-aged married men). Born in 1830, the son of a grain and coal merchant, he left London in the early 1850s in search of a new identity in America. There he worked as a sales agent for the London Printing and Publishing Company that produced books, maps and engravings. An inveterate adventurer, he sold sheet music, lithographs, photographs and, for a spell, was a money lender. He even invented a prototype for an early washing machine. Now Tate Britain has brought together over 150 of his works to demonstrate his pivotal role in the emergence of the art of photography.

The name change was gradual. Edward mutated to Eadweard, taken from the Coronation Stone of a Saxon King that stands on the High Street near his childhood home. Muybridge wanted to be famous and photography was his chosen medium. Readiness was all, for in the 1870s and 1880s the United States was evolving from a remote, provincial nation, slowly pushing forward its western frontiers with the help of the railroad, to embrace the rapid shifts in science, technology, economics and art. Nature, in all its raw sublimity, was about to be tamed. Muybridge’s career took place on the cusp of this revolution. Through his spectacular landscapes of the American wilderness and his motion pictures that revealed what had, hitherto, not been visible to the naked eye, he was responsible for changing visual perception. His time-stopping, interval-based studies of movement made a conceptual leap from working with a third dimension in space to a fourth in time, thus becoming precursors to the modern cinema.

Following the success of Louis-Jacques-Mandé Daguerre’s daguerreotypes and Fox Talbot’s photographs in the early 1800s there was a significant public interest in photography. The Impressionists had largely left the recording of objects to the photographers, whilst attempted to capture the feeling of light. Though as photography matured it, too, became capable of translating both reality and illusion.

Muybridge’s photographic experiments would turn him into a hero for the modern age. Duchamp credited him as the inspiration for his Nude Descending a Staircase, while the Italian Futurists, along with Francis Bacon and Philip Glass all appropriated aspects of his work. His emphasis on process would, in the late 1960s, be taken up by American and European minimalists and conceptualists, as well as filmmakers. After Muybridge the world would never quite look the same. 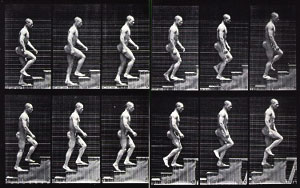 The nineteen century was the age of taxonomy. By cataloguing and naming the world’s constituent parts, rather as a colonial explorer might conquer a new land, it was believed that it might be controlled and understood. Darwin, with his barnacles and finches, was probably the greatest exemplar, though the inclination to create categories ran through the portraits of the French neurologist Duchenne de Boulogne, who charted human expressions simulated with the use of an electrical probe, and Alphonse Bertillon’s mug-shots of Parisian criminals that, supposedly, allowed for the identification of ‘criminal types.’ This was the defeat of the ‘primitive’ and the chthonic by the ‘rational’. It was against this backdrop that Muybridge worked.

Time and motion were his passions and his studies sit somewhere between objective science, visual poetry and voyeuristic inclination. Hollis Frampton has described his vast catalogue of human and animal motions as an “encyclopaedic enormity.”(1) Without doubt Muybridge made visible ordinary events that had previously gone unobserved such as the movement of an arc of water thrown from a bucket or the exact sequence of a horse’s legs when galloping. Yet from a twenty-first century perspective there is something disturbing and uncanny about his images. The Victorian obsession with classification also had its dark side. Apart from animals Muybridge photographed athletes, labourers, boxers, middle class and working class women, nudes and those with physical disabilities, including an amputee and a child walking on all fours, in order to study their movements. By the early twentieth century such scholarly voyeurism would be taken up in the anthropological studies of Bronislaw Malinowski with his publication in 1929 of The Sexual Lives of Savages. Malinowski, like Freud and, indeed, Muybridge, saw himself as a pioneer into the unknown territory of human behaviour. Yet to a modern sensibility there is something slightly salacious, prurient even, about this vision. Why, for example, did Muybridge’s water-throwing woman or those doing the ironing have to be photographed nude? Why were his images of women always accompanied by titles such as ‘spanking a child’ ‘throwing self on a heap of hay’ or ‘getting into bed’, while men, in contrast, were shown as virile athletes and labourers? That Francis Bacon picked up on the homoeroticism of Muyerbridge’s images was not simply due to his particular sexual preferences but because homoeroticism is implicit in the presentation of Muybridge’s sinewy blacksmiths hammering at the anvil or in the photograph of a muscular, well endowed black man climbing a flight of stairs naked. Muybridge also liked, given the opportunity, to shed his kit and strike heroic manly poses. As Marta Braun has claimed “The photographs objectify erotic impulses and extend voyeuristic curiosity in language we now recognise as taken from the standard pornographic vocabulary.” (2)

Ordered hierarchically from nude males to nude females, through semi-nude males and females to children and those with physical handicaps who are observed displaying ‘abnormal’ movements, to horses, domestic and wild animals and birds, it is difficult not to see this as a possible model (conscious or unconscious) for the popular nineteenth century ‘science’ of eugenics. Muybridge’s figures are photographed from too far away for them to have individual identity. They are types, often placed in front of a grid, a tool used for anthropological categorisation and measurement.

Since 1887 his Animal Locomotion has never been out of print in one form or another and The Human Figure in Motion has been reprinted many times. Yet for all his idiosyncratic brilliance Muybridge’s photographs sought to categorise the world through the establishment of a hierarchy in which women were subordinate to men, the working to the upper class, blacks to whites and animals to humans. It is a vision that would come to have disastrous consequences during the first half of the following century.